A Message From Our President-Bro. Dwight T. Pollard

While reflecting on the chapter activities and events held during the later part of the 2021 year such as the Foundation Thanksgiving Turkey/Food drive, winning the Charles H. Wesley Award with The Alpha Eta Collegiate chapter at our District Convention, and our charter/founder’s day celebration weekend. I must say that brothers continued to embrace the overall vision of the Epsilon Lambda chapter which includes reclaiming brothers, raising revenue for both the chapter and foundation through our fundraising, grant writing efforts, and serving our local community by supporting our youth and families through food drives and Alpha Mentoring program with the partnership of The Village lead by our Alpha Brother Kennan Morrison.

The overall success of our hard work and commitment collectively have enabled the chapter to successfully transition into the first five months of our 2022 year.

In January 2022, the chapter partnered with Centennial Christian Church, Washington Montessori School, Fountaine Park community, and other local organizations to plan and execute the fourth annual MLK celebration which included a Commemorate Services, community March, COVID - 19 testing, and giving of PPE equipment to the Fountaine Park community and distributing over 50 bags of goodies and gift cards of appreciation to the teachers at Washington Montessori school. Due to the adverse weather and the resurgence of COVID, some of the planned MLK programs including a community forum and a Freedom Ride trip to visit black history museums in Memphis, Tennessee were postponed. However, through determination and commitment, the remainder of the program was completed.

In February 2022, while hosting a Super Bowl party at Hot Java Bar and Grill, we solicited donations from the guests to support the Ora Lee Smith Foundation Cancer Research which is an ongoing effort supported by the local, district, regional and national components of Alpha Phi Alpha Fraternity, Inc.

The month of March 2022 included: Hosting our second successful annual HBCU College Tour ( Virtual) with the participation of 7 colleges, registration of over 60 students with 40 plus students in attendance, and a dedicated committee of chapter brothers. We also held our first virtual voter registration where we helped St. Louis residents register to vote as well as learn about what their sample ballot consisted of. We also held our Spring IMDP and initiated twelve new brothers into the Epsilon Lambda chapter.

In April 2022, we had our first chapter meeting in person and virtual ( hybrid) which included guest speakers Ericka Sanders and Percy Baldwin from Big Brother Big Sisters of America ( STL). The nomination for new chapter officers ( 2022-23 years) was also held during the meeting. Epsilon Lambda chapter Neophyte presentation for the twelve new initiates was held at Westview Middle school. Special thanks to our Brother and Principal of Westview Middle

school Dominic Lenoir for allowing us to use the facility to host the presentation and the IMDP team for their hard work throughout the overall process. The month of April ended with over 30 chapter brothers registering and attending the 90th Midwestern Regional convention held in Kansas City, Missouri. A great time of meetings and fellowship included a special dinner held for the chapter members during the convention.

The Alpha train moved into May 2022 with full speed ahead with the kick-off of our second in-person Gateway Derby Party in partnership with Delta Epsilon Lambda held at the Chase Plaza Hotel in St. Louis, Missouri. This was an elegant evening with over 500 guests in attendance. Special thanks to the Derby committee for their hard work and commitment to excellence.

The chapter voting of new officers took place in May of 2022. Let’s continue to make this chapter's plans/vision a reality and move to the next level!

We are looking forward to the next half of this year's work of Alpha! 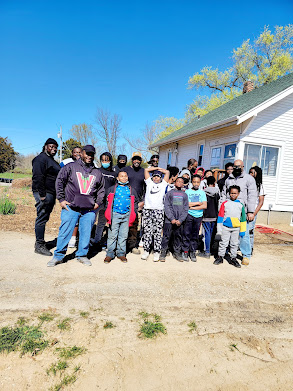 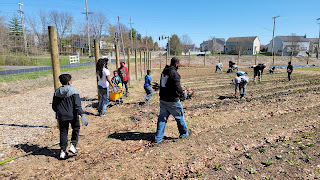 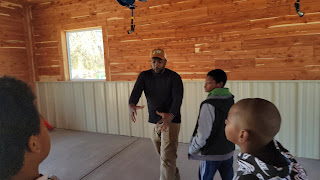 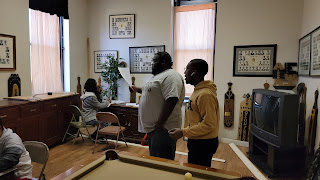 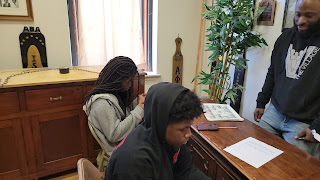 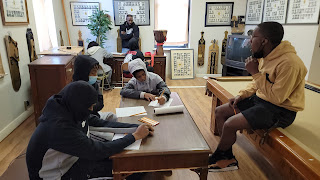 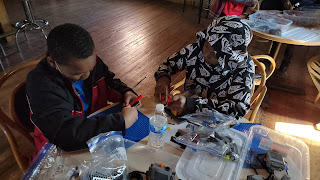 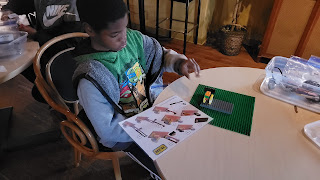 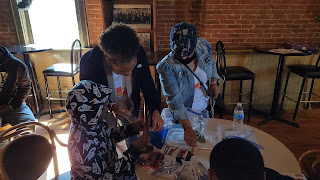 The Village/Alpha Mentoring Program started at the house with the younger boys continuing their STEM Education program led by Tera Roberts. The older boys were doing an activity on the importance of time management which was actually led by one of the Alpha Eta Brothers, Darius Washington. Later in the afternoon, they went to Heru’s Urban Gardening Farm in the North County Area of St. Louis, MO where we helped to plant the crops in the beds as well as deliver the crops in barrels. We helped spread leaf mulch on the walking paths of vegetable beds to suppress weeds and saturate the water. 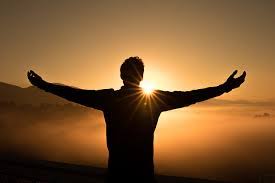 Brothers, we are living in a time where peace is at a premium in our world. This is not earth-shattering news or a new development. However, consider on a global scale the devastating consequences of the unprovoked Russian invasion of Ukraine, On the domestic front,  the bitter attacks and divisive remarks by politicians to prevent the confirmation of the first Black female judge (Ketanji Brown Jackson) to the United States Supreme Court, locally the killing of an innocent landlord just blocks away from the Alpha house, or within our fraternity family, the murder of the sibling of one of our own fraternity brothers. We all directly and indirectly feel the fleeting presence of peace.

What is peace? Biblically, peace is defined as Shalom (nothing missing, and nothing broken), Merriam-Webster dictionary provides a comprehensive definition of peace such as 1. Freedom from disturbance, tranquility, 2. The absence of war, 3. A ceremonial handshake or kiss during some church services. I would like to define peace in one word, Restoration. When we grip each other are we not saying, “peace, and may all be well with you”?

Brothers, as Alpha men we must follow (pursue, make every effort, work at) living in peace with all men so that peace can emanate in our world and in our society. Our individual state of peace is not dependent upon another, but can help bring restoration to the lives of others. Remember:

“Character and temperament change under my dominant power.

Lives, once touched by me become tuned,

and are thereafter, amiable, kindly, fraternal.”

What steps do you need to take today to abide in peace in order to be the change? 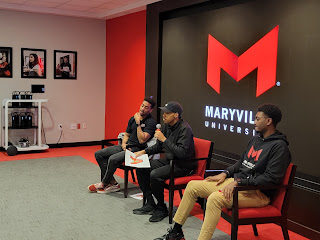 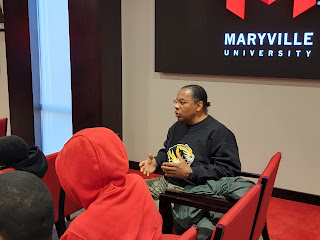 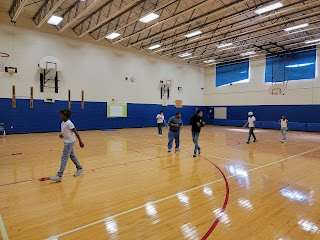 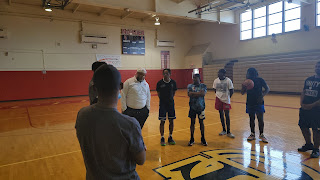 The  Alpha Mentoring Program/The Village went to Maryville University to do a college tour and learn about the various facilities and programs that the university has to offer. Afterward, three members of Maryville’s Black Male Initiative program spoke to the young men about why they chose to attend this university and their experiences on campus as Black men. They also advised our boys on how they should prepare for life after high school and going into the postsecondary world.

After the program, we took our young men to McCluer High School where they were able to engage in various athletic opportunities in the school gym.

The Life and Legacy of Bro. Reginald Foster 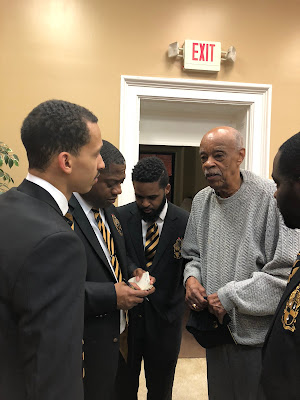 Bro. Reginald Foster was born June 17th, 1931 in St. Louis, Missouri. He enjoyed spending time with his family. He was a graduate of Sumner High School, the oldest black high school west of the Mississippi River.

On November 1st, 1949 Reginald (Life member 1269) crossed the burning sands and became a member of Alpha Phi Alpha Fraternity Inc. Gamma Gamma Chapter. This is the third line of the Gamma Gamma chapter. In 1956, Brother Foster earned his bachelor’s degree in Organic Chemistry from Allen University in Columbia, South Carolina.

Brother Foster was the Chief Chemist at City Hospital until he retired. In the Epsilon Lambda Chapter, Foster served as the president of the housing boards of Alpha Gardens and Alpha Terrace. He also served as chapter vice president and as the dean of membership intake, Bro. Foster also earned several awards for his longtime service to the Epsilon Lambda Chapter such as Alpha Man of the Year, William Alexander Award, and the Daniel W. Bowles award. When he was asked about his most proud moment as an Alpha man, Foster expressed that receiving his 70-year pin at the 2019 Centennial Gala was his most proud moment.

Brother Foster transitioned into the Omega Chapter on November 18th, 2021. He is remembered by many in the brotherhood as stern but compassionate, yet with a sense of humor, He was very brotherly, a great leader who would speak his peace, and was always willing to mentor others. Brother Foster is survived by his daughters, grandchildren, great-grandchildren, and other family and friends. The main meeting room at the Alpha House in St. Louis is named after him. He will be sorely missed by all those who knew him and by the Brothers of Alpha Phi Alpha Fraternity, Inc.

Decisions in Life and Rock Climbing 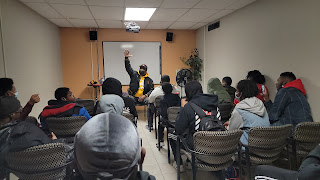 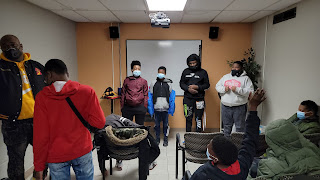 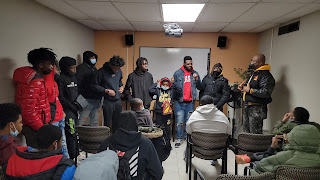 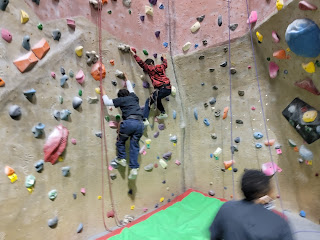 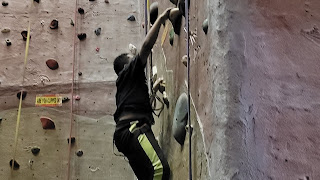 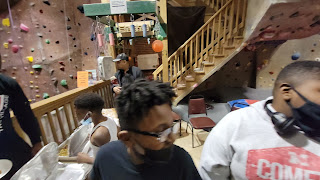 On March 12, 2022, the Alpha Mentoring Program had a special guest speaker Brother Leon Hite who spoke about the importance of life and proper decision making, and how to properly interact when facing challenging situations. We then went to rock climbing at   Upper Limits where the purpose was for the boys to challenge their fears and learn the importance of overcoming obstacles such as when taking on an endeavor.
at March 23, 2022 No comments: 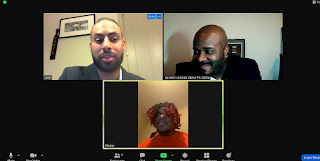 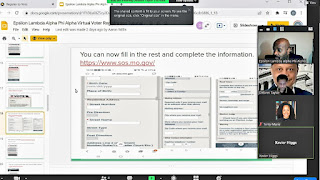 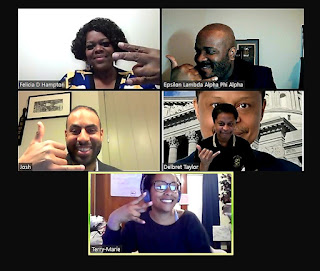 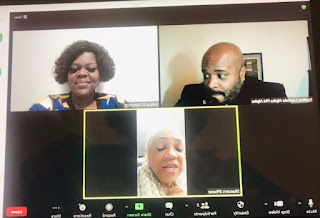 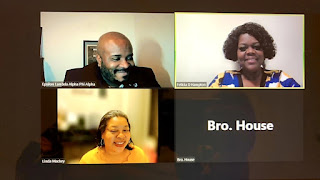 On Tuesday, March 8th, 2022  the Epsilon Lambda Chapter of Alpha Phi Alpha Fraternity Incorporated hosted the first virtual voter registration. This was to help residents in the St. Louis City and St. Louis County areas register or change their address. We were able to help people register online through the Missouri Secretary of State website. Thank you to Northwoods Mayor Sharon L. Pace for coming through to show your support.  Thank you to the ladies of the Eta Mu Sigma Chapter of Sigma Gamma Rho Sorority Incorporated for volunteering and helping with this event.
at March 23, 2022 No comments:

A Message From Our President-Bro. Dwight T. Pollard

Greetings Brothers,  While reflecting on the chapter activities and events held during the later part of the 2021 year such as the Foundat...